Skip to content
Some people have a lot of time in their hands and they spend those times to chat endlessly, without realizing that time is flying. I am not talking about friends chatting with the friends they know and meet in person. I am talking about people who chat with strangers on the web. This is such a temptation at first to chat with people, anyone is ok to chat with, as long as they are of the opposite sex!
I too have had such a temptation to chat with strangers and I have logged into some online chat forums, met some people on social networking sites and added them on google chat, etc. It was nice to have an online friend. But out of the 10 friends I made online, only two or three of them I still keep in touch with. Having such online friends have also come in handy at times. One of my online friends is staying in Sydney where I will be going to in July for further studies. So this has actually benefited me as I have someone I know living in Sydney (FYI: It is a woman, happily married with two kids.).
All this is on one side of the online friends world. But then there is another side for the internet chatting world, and it is pretty dangerous. Some of the extreme cases have ended up in crimes committed. Some of the normal cases have ended up in a guilty conscience. Why take such risks when you know there is so much at stake? Meeting a person online is different from having to meet them in person!
I usually go to this site to watch drama series online. In that blog site, they have a live chat room widget and anyone can use it to chat with the people viewing the site. It was really funny to watch two strangers saying “hi” to each other and asking “how r u?” so caringly as if they both know each other for a long time in their lives! And the guys only talk to the girls and vice versa!
Take a look at this print screen of a chat I was observing while I visited the site. Initially this woman was talking with a guy called “Sekar”, after which he left. Then came along another guy called “har”. 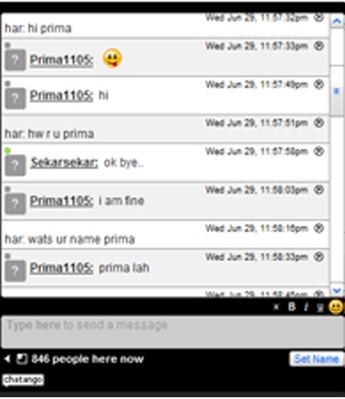 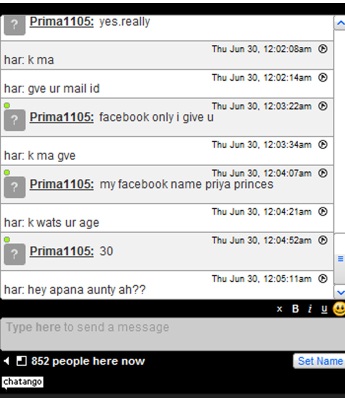 Gosh! This is what is happening all over!! I couldn’t stand it one day when things went out of hand in a public forum site. I and a few others interfered and chased away some people who were creating the rackus! This is where our world is heading to… Hell!

Hi friends! Welcome to my blog. I just moved to Wordpress from blogger... No particular reason. You can still access all my blogposts here. So do keep the comments coming in :)
Follow @PriyaAryaputri
My Tweets