There comes a time in life when each and everyone of us will start to search for answers for questions like what is the purpose of life, who is God and so on. Often you can turn to your own religion for guidance, and if you are lucky, you will find the answers. But what happens when you are lost? What happens if you are finding it hard to source out for information? What happens if you have the notion that all religions are the same, so one can find answers to these questions in any religion, and that should be sufficient.

Back in 2006, questions like these started popping up in my head. Despite being born in a Hindu family (which I realise now how lucky I have been), I had no idea why we go to temple, why we pray to ‘idols’ and statues, or why we make offerings. Parents were clueless as well, so I had nowhere to turn to when it came to my religion, Hinduism (or so I thought). Therefore, being a scientific-minded person, I turned to books to help me with that.

I remember specifically that I had been watching an amazing documentary about evolution and the big bang theory. I was obsessed with the information surrounding the beginning of this universe, the cosmos, the planets, evolution, natural selection and Darwin. I realised that while the Abrahamic religions claimed that the universe was created only 6000 years ago, science says that the universe is about 13.7 billion years old. For me, belief alone was not enough. I needed concrete proof because I was and still am stubbornly logical. That pushed me towards reading two authors, who have greatly influenced my thinking, my philosophy and my life; Richard Dawkins and Ayn Rand.

The first book of Richard Dawkins that I read was The Selfish Gene, in which he explores the biology of selfishness and altruism. It was an illuminating read as it showed that there is no need to infuse divine involvement in replicating genes. Due to my rudimentary understanding of the concept of God, derived from the teleological argument, I came to a conclusion that an intelligent designer is not needed when it comes to explaining the existence of the world. Evolution as an answer was sufficient for me.

I then turned to Ayn Rand’s The Fountainhead and Atlas Shrugged, two of her classical hits! These are both amazing books, in my opinion, although she does go over the edge at times in order to bring life to her philosophy. Ayn Rand’s philosophy was called objectivism and it can be summarised as “the concept of man as a heroic being, with his own happiness as the moral purpose of his life, with productive achievement as his noblest activity, and reason as his only absolute.” Her ideas had a profound impact on me as it made a lot of sense, and again pushed me towards believing that God does not exist. At this point in time of life, I had given up on the idea of God or religion.

It was the same time period when I was studying in Anglo-Chinese Junior College, which was a Methodist school and it had chapel service every Monday. I would sit there every Monday during assembly and listen to different pastors and students quoting the Bible and talking about life in general, seeing the Muslim students walk out of the auditorium. I remember sitting there and wondering whether I can walk out as well, because not only did they have chapel service, but they also had a band playing Jesus songs and we had to sing along as well! It felt totally ridiculous to me. I was in the middle of reading Richard Dawkins’s The God Delusion around that time, and I felt that religion and community gathering were only for self-appeasement and self-assurance. Without religion and moral codes, man will be lost. So I accepted that religion was not for the rational-minded, but it was more for people to keep them in check. These were my thoughts back then.

At this juncture I had become a complete atheist, but I kept this mostly to myself. I blogged about my thoughts and some of my friends had things to say to me to counter my arguments. But I did not bring it on strongly. My views are my views, and I need not impose it upon anyone else. I had other conflicting thoughts about atheism as well, and I kept them to myself. It was a moment when I felt like a nihilist, no hope for the future and nothing to hope for in the present as well. That was a depressing thought and I didn’t understand why I was feeling like that. Maybe it was because the thought of God not existing was a disturbing one and it hit me hard. I felt that I should not give up on my search for meaning and purpose of my life.

When I joined NUS for my Bachelors, I saw a poster advertising an upcoming drama production, organised by a few Indian society/clubs, including the Hindu Society of NUS. I contacted the number in the poster to purchase the tickets as my friends were keen to watch the drama production. The person I contacted, Mr S, hooked me up with the tickets and through him I found out that he had been successfully running an online forum on Hinduism. Little did I know that Mr S would have such a profound impact in my life, because he became the reason why I turned back to Sanatana Dharma. It was through Mr S that I got to know about the Misconceptions in Hinduism talk organised by NUS Hindu Society and that is how I met Mr K.

My learning journey had started in 2007 after I met Mr S and Mr K. I joined the Hindu Society and got myself involved in a lot of events that helped me in learning more and more about Sanatana Dharma. End of 2008, the Hindu Centre announced that it was to have a Diploma in Teacher’s Training course, to be conducted under the tutelage of Mr K and one Mr R. It was to be a 2 years course, to be held every Saturday from 2pm to 5pm. I signed up for it, attended an interview with Mr R and got into the program. The program was free of charge, provided that we volunteer to take up classes in Hindu Centre after graduation. I did not expect myself to become a teacher but I knew I was going to learn more about Sanatana Dharma.

Classes started on 10 Jan 2009. That was the day my journey actually began. Before this, my knowledge about Hinduism was really half-baked. We covered a number of topics about the God, scriptures, caste system, karma, dharma, moksha, bhagavad gita and vedanta. As teachers, we are supposed to have 10 times the knowledge of what will actually be taught in classes. For example, if we are to teach about karma, then we have to be equipped with 10 times the knowledge about karma, than what we actually teach in class. Learning, researching, and discovering new information is my forte, so naturally, I loved attending the classes and I did so without fail. We also learned some Sanskrit chanting and it was the best part of the day for me because I was realising for the first time in my life that I loved to chant.

Once my understanding of the definition of God became clearer through studying Sanatana Dharma, I realised how my atheistic thoughts were wrong. But only with reference to Sanatana Dharma. This is because we do not agree to the teleological argument that there is a separate entity that intelligently designed this universe. This argument goes straight against logical reasoning and invalidates the notion of God being omnipresent, omniscient and omnipotent. In the words of Richard Dawkins:

“The whole argument turns on the familiar question ‘Who made God?’… A designer God cannot be used to explain organized complexity because any God capable of designing anything would have to be complex enough to demand the same kind of explanation in his own right. God presents an infinite regress from which he cannot help us to escape. This argument… demonstrates that God, though not technically disprovable, is very very improbable indeed.” – The God Delusion

The more I came to know about Sanatana Dharma, the more I realised how wrong my initial impressions were. Some of them (and not even a drop in the ocean) are as follows: 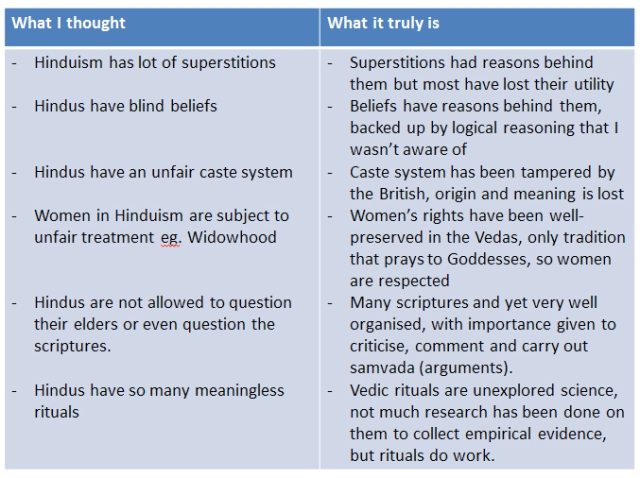 Working with youths in NUS during my days in the Hindu Society, I realised that many Hindu youths are growing up with such wrong impressions about Hinduism. It is the duty of the parents to inculcate these values in their children from young. However, parents themselves are not much aware about Sanatana Dharma. It is sad really, because the Hindu way of living is very much part of our life. From the moment we wake up and pray to Bhoomi Devi (Mother Earth) before setting foot on Her, till the night when we pray for sweet dreams and thank Ishvara for blessing us with a healthy life. There is not one moment in life where I am separate from God.

Hi friends! Welcome to my blog. I just moved to Wordpress from blogger... No particular reason. You can still access all my blogposts here. So do keep the comments coming in :)
Follow @PriyaAryaputri
My Tweets
Join 5,667 other subscribers